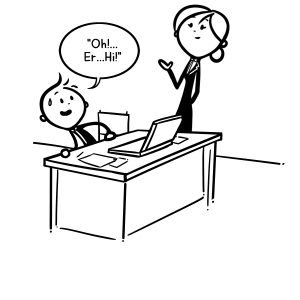 The Avoidance Greeting is that which is given by a greeter who has been trying, hard, to avoid the greeted. The subtle psychology of the avoidance greeting is such that the greeter is often troubled by something due to the greeted, e.g., overdue work, a failed relationship or really bad prior date.

Hey, the Avoidance Greeting has it all: a bundle of anxiety, an uneven balance power and strength and weakness vis. the relationship. Any one of these instances could read like a tantalizing novel in the ‘cheap thrills’ section of the airport: “Breathlessly, Alice hid behind her coffee-stained cube divider as Bob, her manager known as “The Shark”, prowled in search of someone to give the dreaded quarterly results update. And the quarterly results were worse than the feeling in one’s stomach after a long night of drinking too much cheap vodka and over-eating cheeze-it snacks”.