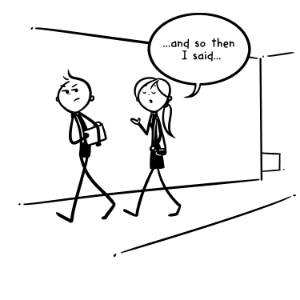 A greeting in which the greeter, or the greeted, speak continuously until interrupted by either (a) the other party or (b) external events.

The run-on bears strong similarity to the overly detailed, except that it may be less so — simply is a run-on dialogue that doesn’t end quickly, because the speaker continues to speak long after the greetings probably should have ended, which would have originally resulted in an appropriate greeting, but isn’t appropriate any longer because it hadn’t ended. So there.

The funny thing about run-on sentences and paragraphs is that they differ by culture, for example, native Spanish speakers tend to produce run-on sentences in their English writing due to the native Spanish speaking and writing convention of simply writing long sentences, which makes (a) awareness and (b) proofreading really important cuando estas ecribiendo in otras lenguas. Sabes?