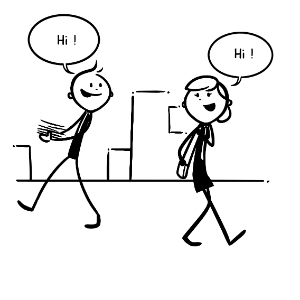 The drive-by greeting is a perfunctory greeting made in passing. It includes no follow-up and indeed, gives little time for the greeted to elicit a response. A response by the greeted will often go unrecognized or noticed. This greeting is, perhaps, an individual’s response to the fast pace of an office environment as it clashes with the desire to socialize with each of those one might pass.

Writers, workers and cartoonists have long complained about the pace of the workplace vis. its impact on health and personal well-being. In 1875, essayist William Rathbone Greg wrote:

“Beyond doubt, the most salient characteristic of life in the later half of the nineteenth century is its speed-the rate at which we move and the high pressure at which we work… [is this] a good… [and] worth the price we pay for it?” (Greg, 1875).

In 1875, as more recently, researchers and grumbling office workers suspect that pace of life is correlated to such detriments as coronary heart disease (Levine et al., 1999) by way of the impacts of stress (Chandola et al., 2008), including poor diet and sedentarianism (take that, dictionary!). However, an earlier (2003) meta-review conducted by a boisterous, well-credentialed Australian group found that workplace stress had little effect on heart disease; instead, depression and social isolation were predictors (Bunker et al., 2003). Golly! There were 11 authors on that article. Re: re: re: re: that, imagine how stressful that e-mail exchange would have been!

So… what to do? Next time you’re taking a stroll at work, slow down the pace a bit and say “Hey!” with the High Five greeting. It’s a far more positive approach!